Now go wild translating and send us the ts-file. We will include it in our next release. We will contact you to update translations when new ones are needed. You will also experience how nice linguist behaves to only ask you for the changed strings to be translated. We are looking forward to working together on delivering gpg4usb in your language.

Especially useful for your translation work are the buttons

from the toolbar. With the left you jump to the next untranslated phrase, the right one marks a phrase as translated.

Some further reading on how to use linguist as translator is available at http://doc.qt.nokia.com/latest/linguist-translators.html.

To integrate a new language into gpg4usb, one of the developers has to do one simple step and then the translater can begin his work. For the translator, the most simple way is to use the Qt-Linguist. The developer has to install lupdate and lrelease. In Linux these are contained in the qt4-dev package. Some detailed documentation on the linguist is available here.

At first a developer has to add a line for the language in the gpg4usb.pro file in the TRANSLATIONS section looking like

where <language> has to be replaced by the characters, which can be taken from this list.

Then the developer has to run lupdate, so that the appropriate ts-file is created in the release/ts directory:

The ts file is a xml-file, which contains the original phrases, the translated phrases (when it's done), the status of translation, comments to the translation and some other information. 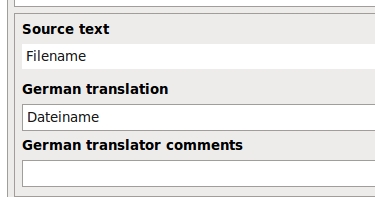 Three things have to be taken care of.

After translating all the phrases, you have to choose File , Release in the linguist's menu. With this an appropriate qm-file (quite like a binary language file) is generated.

Now you can run gpg4usb with the new language by choosing the language in the settings menu.

When the project envolves, it's possible, that new expressions have to be translated. In this case the developer has to run lupdate once more. The translater just has to open the new ts-file with the linguist. On the upper left, he sees in the context menu, in which section are new phrases to translate (everything, which hasn't a green haken in front).